Since 2018, COMELETRIC has officially announced Southern Asia Commercial Joint Stock Company (SACOM JSC) an exclusive distributor of Comeletric in Vietnam. This cooperation has been marking a new step between the Comeletric brand and Sacom JSC in the distribution of Comeletric-branded electric locks and panels from Italy to the Vietnamese market.

Vietnam is considered to be one of the few countries in the world which is the best in controlling Covid-19 and at the same time, maintaining a positive economic growth in 2020. In order to continue maintain sustainable development and bringing the brand of Comeletric to become familiar to Vietnam market, Sacom JSC has cooperated with Bizman Media - The leading company in the field of advertising and communication in Vietnam.

Bizman Media's Hanoi inner city Led screens come with exclusive uniqueness. They are located in ideal locations, on crowded intersections with huge traffic every day. While waiting for the red traffic light, passengers have plenty of time to observe and capture the messages and displayed on the advertising screen. Below are the two advertising positions that Sacom JSC has chosen, ensuring the capture of customers impression and especially stimulate the consumption of target customers.

Hai Ba Trung - Phan Chu Trinh intersection is one of the key intersections of Hoan Kiem district, Hanoi, with a large traffic density. Moreover, the LED screen is located at an unobstructed view which makes it the only spot where able to gather attention from the by-passers. That is why the outdoor advertising Led screen on the facade of the Hanoi College of Arts has the opportunity to reach a "huge" number of passers by every day. 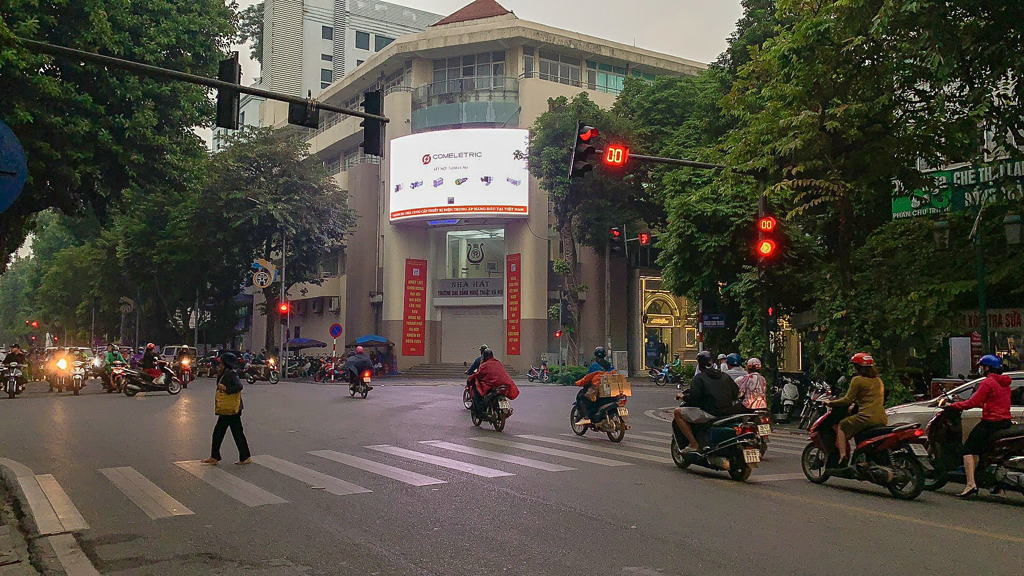 This intersection has an approximately traffic of up to 350,000 vehicles per day. The Led screen is located in a prime location, at the corner, so it has an ideal position where catches the full view of the traffic flow from Hai Ba Trung street towards Cua Nam market and direction of Phan Chu Trinh street to Lo Duc Street.

Located at the center of Ba Dinh district, close to the Old Quarter, Hoan Kiem Lake and Hanoi's most prestigious entertainment centers, the Led screen mounted outside the front of the hotel Santa Barbara at 23 Quan Thanh Street is also considered to be the best LED screen of Bizman LED systems. It has the opportunity to capture many customers’views, especially the number of pedestrians and foreign tourists traveling by.

The front of Santa Barbara hotel is located at a wide and open corner, so the Led screen here can easily gain the attention of two directions, including direction of Quan Thanh to Thuy Khue and direction of Hang Bun to Phan Dinh Phung . 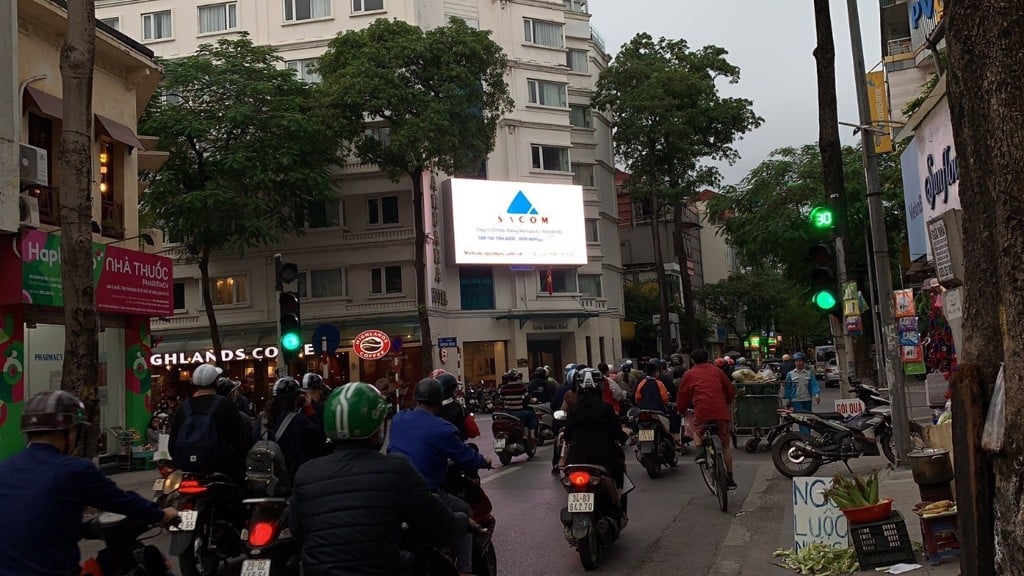 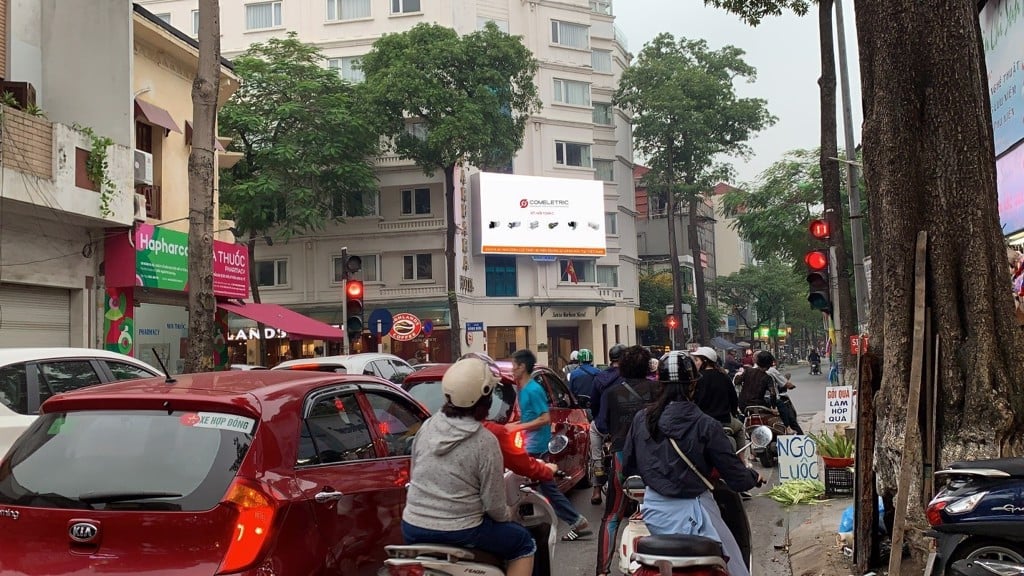 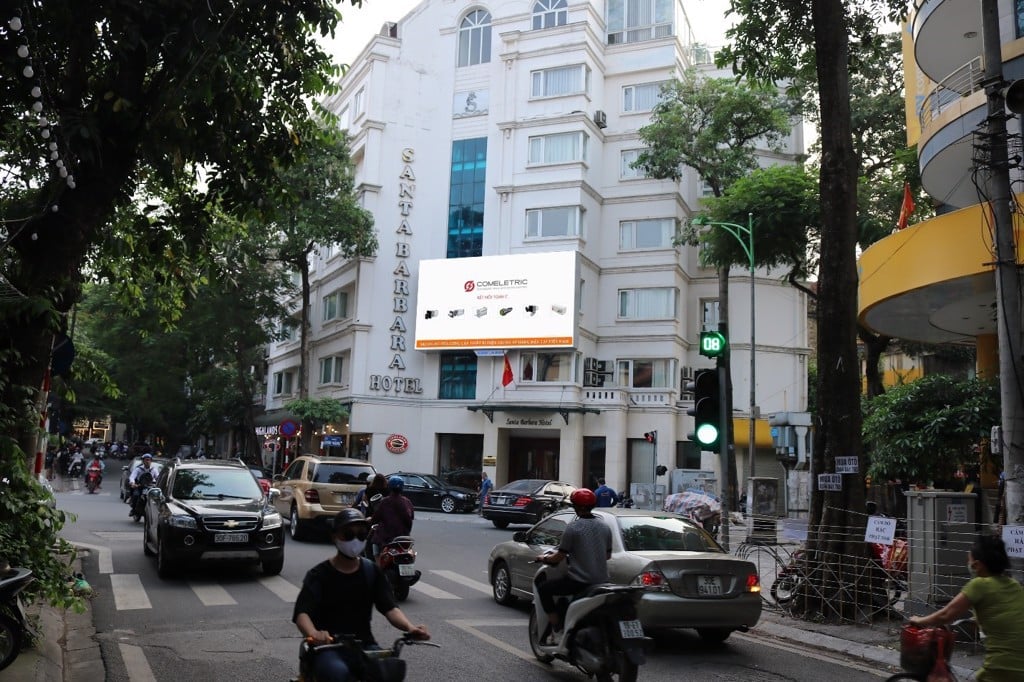 In general, the combination of these LED screens features and their prime positions are the most suitable for Sacom JSC communication plan. Advertising Led screen technology obtains a sharp, vivid image, especially brighter and more eye-catching at night. In addition, the ability to adjust and replace the Led display advertising Marquette is easy, fast, and saves time and costs; very suitable for multi-stage advertising campaigns. 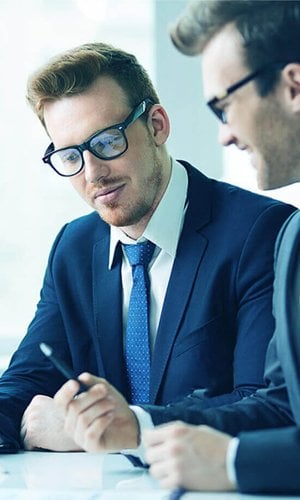